skip to main | skip to sidebar

For anyone discovering this blog, and looking to connect...

We have a wonderful group on FaceBook that is active and fun! Join us there!
We look forward to hearing from you,  and have you enjoy interacting with long lost friends, reminiscing, and finding out about reunions that are held. There are over 350 members in our CFW group, as of early 2020.

When requesting to join the group, you MUST answer the questions to be added* to the group.


*There have been people who ask to be added who are looking for the Four winds that is on the other coast, as well as crazy spam requests, which led to requiring answers to basic questions that anyone who spent time at Four Winds, would be able to answer easily.
Posted by lindsey starr at 1:33 PM No comments:

This is a clip from the service....
There were quite a few of us who sang this wonderful song!

Posted by lindsey starr at 1:08 PM No comments:

With a very heavy heart I’m writing to let you know that my mother has passed away.

She left us peacefully on March 22, 2009. She had an angel at her side in the guise of a hospice nurse named Mary who, along with a band of very caring and skilled medical personnel at the nursing home, made sure that she was comfortable and pain-free to the end.

Many of you have already received the word. It appears that the Camp Four Winds network is alive and well! I can’t thank you enough for your wonderful outreach with emails and phone calls. Your compassionate response to our loss – which you share as well – means the world to Dan, Benjamin and me.

We are holding the service on a Saturday with the hope that it will make it easier for those of you from out of town to attend. Your family members are also most welcome.

Mrs. Mac touched so many lives over the course of her lifetime that I hope you will be able to join us as we recreate her Sunday Chapel Service at Four Winds. I couldn’t think of a more appropriate way to celebrate her life than with the words she used to inspire us when we were young. Percy will be reading Mother’s part and there are a few opportunities for you to participate with additional readings if you would like.

I would be grateful if you could let Beth Owens Davis know if you plan to attend (we need to know how many PB&J’s to make) and if you would like to participate in the service. Her email is emowens1@yahoo.com <mailto:emowens1@yahoo.com>
(*aside note... you can also RSVP on FaceBook.. at the page for Camp Four Winds. Click to "become a fan" and in the left column you can click on the event and that you will or will not attend)
Beth is keeping track of the speaking parts and will know which ones are available and what they entail.

We are all Mrs. Mac’s “girls”. She gave us her best. We are her legacy. Please join us as we hear her words one last time and say “au revoir” to a truly remarkable lady.

You may also make a contribution online at:
www.mcht.org <http://www.mcht.org> and click the blue “donate now”
rectangle in the upper right had corner.

Again, please make sure that you indicate that your gift is in memory of Grace Hooper McNeal.


Contributions will go towards conservation work on Caterpillar Hill, Maine with is much-loved vistas that overlook Walker Pond where Four Winds was located that held such a special place in my mother’s heart.

Along a coast renowned for its scenic beauty, Caterpillar Hill in Sedgwick stands out – offering a quintessential Maine view of sloping blueberry fields opening out to the island-dotted, mountain-rimmed waters of Penobscot Bay.

Maine Coast Heritage Trust is a statewide land trust working to preserve the character of Maine.
Posted by lindsey starr at 2:53 PM No comments: 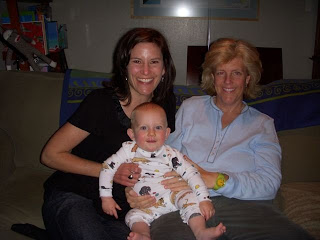 Celene and Ashley with Bodie
Celene Domitrovich had the chance to visit with Ashley Ransom, while out in CA on a business trip. They had fun reminiscing, and playing with Ashley's beautiful 1 yr old son, Bodie Thomas Ransom. ...
Posted by lindsey starr at 12:25 PM No comments:

Thanks to Patricia Fullaondo, there is a group for Four Winds on Facebook, if you would like to join and connect there. It is easy to do, and fun too. The guestbook here is good, and has been a good way for people to find Camp Four Winds on the internet in google searches. But make sure to check out the group there and join. As of this writing there are about 61 members in the group.
Posted by lindsey starr at 9:19 AM No comments:

There was a gathering in Baltimore last week, and many alums visiting together. Cathy has sent photos for me to post here....
and doesn't Mrs Mac look great! She just never seems to change! 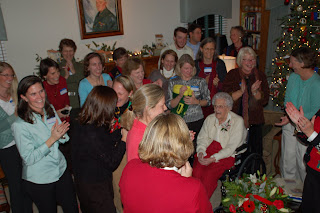 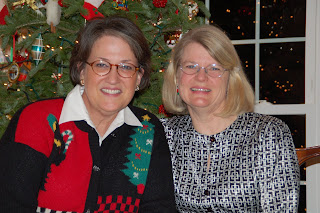 I was visited by Lucy Stevens last week! She was a counselor, from Australia, in 1988.

The next year, my sister Sue Haviland (canoeing counselor in 1988) went to Australia and stayed with her family for many months. Now our parents have visited each other, and corresponded over the years. Lucy came to visit the US with her parents for a few weeks. Her parents stayed with mine, and Lucy drove the hour further to stay with me. We had so much fun getting reacquainted, but unfortunately forgot to take a photo!!!

has anyone else had a mini reunion? and willing to share a photo?
Posted by lindsey starr at 10:49 AM No comments:

This was at the Punchbowl on 4th of July , 2004. Still lobsters, just not quite so many!
recognize anyone? 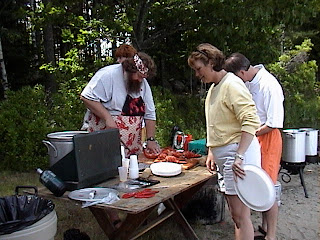 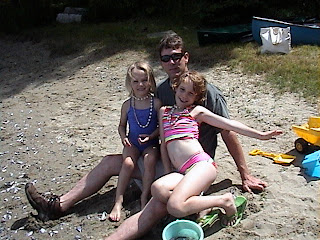 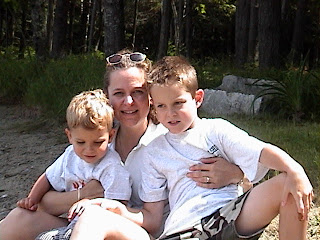 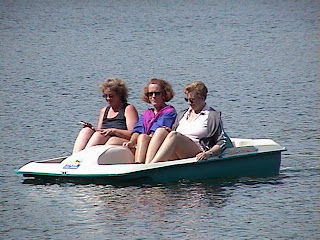 Posted by lindsey starr at 10:49 AM No comments:

for those of you who search on the internet....
yes, this is the one and only site to reconnect somehow with former campers and staff.
Camp Four Winds in Sargentville, Maine

Camp is no longer there, but it does still live on in our memories and hearts. I started this website, under the approval of Cathy Mac, so that there would be some way to connect. A few people have found their way onto my own blog, and then somehow not made it here. Hopefully more will get here. I would love to have ideas for how to connect better, and how to make this site something that is more used. Please email me if you have ideas! (lindsey at stonepier dot com)
Posted by lindsey starr at 6:33 AM No comments:

Alum update:
for those of you who knew/know Gina Miller- she just had a baby in August! Yeah! She is now Gina Brown, and lives in Collinsville, CT with husband Marc. They now have baby Mason too.
Posted by lindsey starr at 11:02 AM No comments:

there have been lots of visits to this site, and not many people leaving comments, or signing the guestbook! please do! others may be looking for you, and this is such a good way to connect.

if you would like to send any old photos, I will be happy to post them on here too-
scan some in and email, or email me, and I will give you my snail mail address to send me photos for me to scan and return to you.
(send them to me at: lindsey_ at_stonepier_dot_com ... remove the underscores in the address)

I'll start by posting some of the ones I have.
Posted by lindsey starr at 10:42 AM No comments: 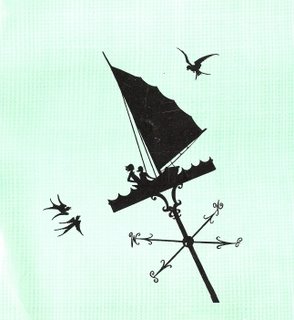 Working on putting the logo up in the banner....
trying to figure out how!!!
(I'm pretty computer savvy, but not an expert!)
Posted by lindsey starr at 1:13 PM No comments:

Please leave your mark in the guestbook 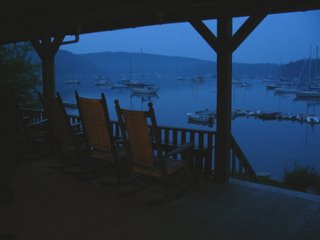 the Buck's Harbor Yacht Club porch at dusk
Hello all....
Okay, I have found a good guestbook resource, that you will find in the sidebar to the right.
It is an easy way for anyone to sign in and leave comments, and any info, as well as let others read through it. Please make an entry if you are an alum, even if just to say you visited this website. There may be an old friend looking for you!

Thanks!
~Lindsey
Posted by lindsey starr at 10:30 PM No comments:

Beginning to get in touch....

This is for all Camp Four Winds (of Sargentville, Maine) alums and friends who would like to keep in touch. I am trying to find a way to make a 'guestbook' so that people can sign it with their email addresses if they want to be able to be contacted, or post if they are hunting for someone. For now, just leave anything in the 'comments' area for others to read.

I am in touch with Cathy and she has approved of this medium for all to get in touch with each other, as she is aware that there were special bonds developed at Four Winds, that many long to either continue, or to reactivate. We talked about it briefly when we got together at the wedding of Gina Miller this past weekend. 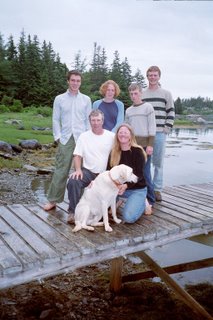 I lived in the farmhouse while I was head of riding. Two of the years there, I shared the farmhouse with the Jackson family- Mark, Karen, Dylan, Tristan, and Hope (later they had Oakley too). I am still in touch with them as well, and see them almost yearly when I visit Vinalhaven, which is where they live. (photo is of the Jacksons in 2002)

I spent most of the summer of 2005, with my two boys, living in a house with Susan (Melvin) Melia and Jim Melia and their two daughters, and had stayed a few weeks the summer before as well. Their house is up the road from Margaret's (Margaret Fowler) and also Roy Fowler. I was able to see quite a few familiar faces including Dave and Donna McBeth and their kids, Eleanor Shriver McGee, Margaret Thompson, Gavin from Australia, Sherry and Shawn Stanley, Mark and Jeremy, and I know Susan visited for a weekend with Ashey Ransom, Celene Demitrovich, and others.... I also got to know Katherine Ekberg who was working at Nichols Camp with Jim Melia.

Hopefully more people can be back in touch through this website. I will be happy to post photos too if you email them to me at: lindsey (at) stonepier (dot) com.
Posted by lindsey starr at 3:41 PM 2 comments: 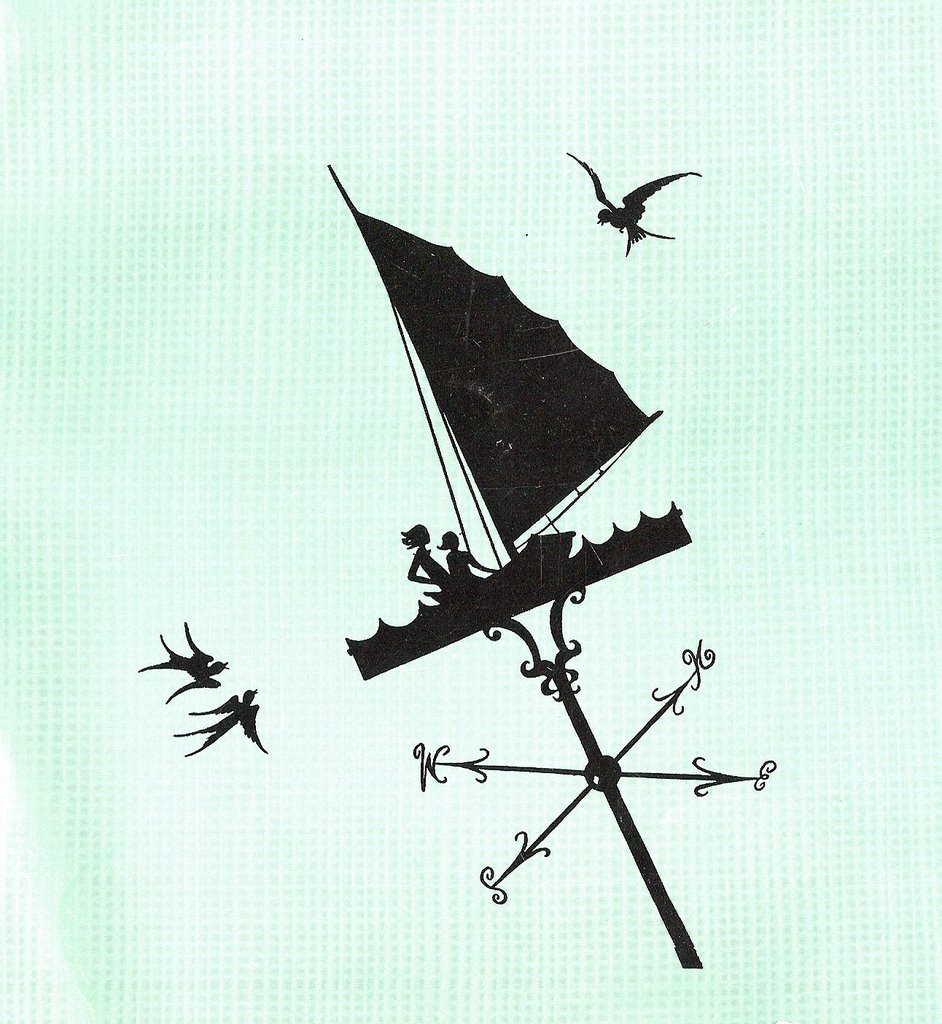 Camp Four Winds, Sargentville, Maine .... a special place for many years. A girls camp, started by Grace MacNeal, for girls to spend their summers by a beautiful lake on the coast of Maine.

Walker Pond was enjoyed by girls there for about 50 years, spending 3 -7 weeks, year after year. Unfortunately it is gone now, but it lives on in the hearts of many.

It seems that quite a few people search online specifically for Camp Four Winds, but then don't leave their info. Please do, as the next one hunting, may be trying to find you! :)

When did you spend a summer at Four Winds?

lindsey starr
I'm a mom and more... I have ADD (can't you tell?)... horse person... cooking... eating... traveling... languages (including english) intrigue me... sociology and exploring other cultures fascinates me... teaching comes easily to me... love: my family, Maine, water, mountains, plenty of space outdoors, room to breathe, kids, yoga, skiing, riding, good linens, balance in my life, time to talk, nature, even my old bear....